Stopped by to check on Kit Friday evening, remove a layer of mud...with all the rain there is a lot of it and it seems to be a favorite to roll in right now! It took some time to groom him, but in the end, we got most of it!

It has been a full year at the end of April since he fell and broke his right shoulder.  The bone has healed completely, with some thickening to the synovial capsule of the scapula/humerus juncture, but range of motion and movement are good.  Video below.

I decided to do some bodywork on him, it has been a couple of months since his last work, and I noticed some  reactive areas during grooming.  He is still unwilling to allow manual manipulation of the left front, his support leg, to be lifted for cleaning or therapy. We are working on that, but today I decided to try a new tact with him, to not even ask for it.  I began with therapies using touch, massage and acupoint releases from withers to hoof.

It was interesting to see him go through all his resistant patterns that he does when I ask for the foot.  He always offers the other leg, and has a whole pattern of refusal...but this time it finally sunk in that I wasn't even asking...that confused him.  He gradually did relax and allow himself to just chill out and enjoy the process. 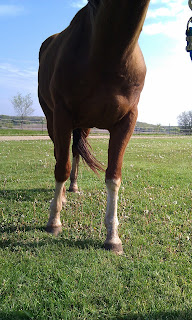 He relaxed so much, I was able to float his scapula, as all his weight was off it and he had completely relaxed the shoulder.  He had great release, which I think surprised him, but he didn't shift his weight...yeah, making progress. Don't know if you can see it in this photo, but the left front cannon bone and leg structure is a full 1/3 heavier then the right. His hoof is more "pancaked" out, and  I also noticed his tendons have bowed slightly.

A little video of gait analysis...yes I know too short of a rope here, will use the lunge line next time.  I'm still seeing abnormalities on how he is using his body, but he is making progress. We shot this to establish his 1 year movement baseline.

Continued with his bodywork into his neck, poll, and shoulders, with significant bracing with the lightest techniques.  See even my own horse can have issues and need work!   He took a lot of tension, muscle damage, and restriction into the base of his neck when the shoulder broke and through the continued pain and modifications to his movement during healing has retained it and protects it. 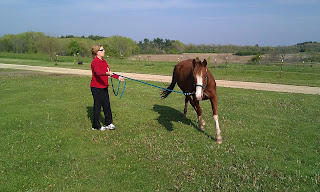 While the break is healed now, the recovery is far from over, physical therapy to strengthen the leg, and help him to yet again remodel his body...this time toward a more balance form.  As well as working through his psychological barriers of pain anticipation. 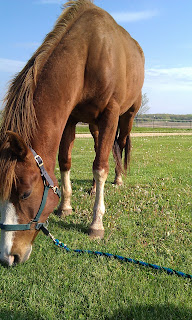 But he is SO worth it!