Well, it appears he slept well last night, extra shavings in his stall and all evidence that he was sleeping flat out.  That made me feel good.  Just did catch him before he got up. Which I'm glad to say he did without hesitation. 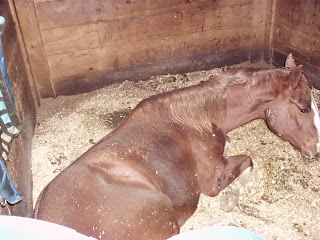 However, after he was up, he did not want to weight the leg.  I massaged his shoulder and neck to get the blood moving and the muscles warmed up.  A bit of whiskers in this shot, curious as ever, and willing.  You can see from this angle the swelling has pushed the bone outward once again. 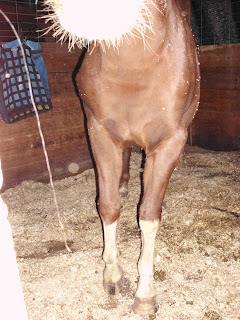 As we walked, slowly.....he would try to use the leg, it took several minutes of patient walking on stable ground.  Each step I allowed him to decide if he would take it or not.  But as we took one, then another, the shoulder got more flexibility, and he would start to weight the leg, just a bit.  By the time I had him to his turn out pasture, he was moving much better, and being turned out always helps him to move more easily.  Again, motion is lotion for joints.

I think it's going to be a long winter.  But I'm not about to give up and neither is he.
Posted by Tami Parr at 2:01 PM 1 comment:

Wonderful Thanksgiving with family.  We are blessed.  Mom up and sassy, as was her brother, my Uncle George!  Great day, great food, and wonderful company.  Oh, and the Packers won!   Too bad Arkansas Razorbacks couldn't have done the same the next day.

Kit on the other hand, has had a set back, his leg has swollen at the shoulder again.  Unsure of what happened, but suspect he did too much too soon, and with the mud right now may have just moved wrong.

I've started him on Vaximine and he is out in a smaller turn out with no buddies.  There are right next door and he can touch noses over the fence, but none in the paddock with him.

Yesterday as I brought him from the stall, he was inside over night, he wouldn't even weight the leg.  We were back to hopping, very slowly, to move.  But as I tempted him with grass, just a few steps further, and he began to move more, he would tentatively try the leg.  I got the Vaximine in him, and we just went very slow, but after 10 minutes we made it to the much desired grass.  I held him and let him graze for a good 45 minutes.  All the while he would try the leg, or hold on the toe, then try again.  I'm happy to say by the time we moved off the grass he was walking on all 4's.  Limping but walking.  I really think movement is key, so tonight he stays out, I want him to move about and keep the leg active.  Stalls are just too confining.  Motion is lotion!
Posted by Tami Parr at 3:33 PM No comments: