Great evening of teaching and sharing information on horses.  3 amazing women, destine to be energy workers in the world of horses, in the future.  I was happy to help them along with their learning and answering questions.  No photos of our session, but sharing a couple of a previous class, below. 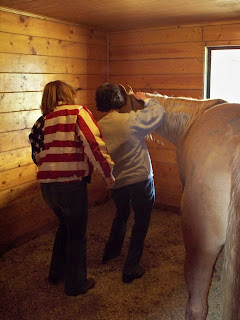 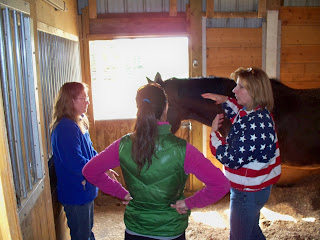 Off to Illinios tomorrow to work on horses at the English Prairie Farm, in Spring Grove, Il. Should be a full day of good people and good horses!  Husband Skip will be along, so photos are sure to follow!
Posted by Tami Parr at 9:19 AM No comments:

Labor Day at the Barn

At the barn today, Kit got groomed, and Professional Photographer-Carrie Swan took photos of us.  My birthday present from her. What fun it was posing with Kit.

I've posted some I took today below. 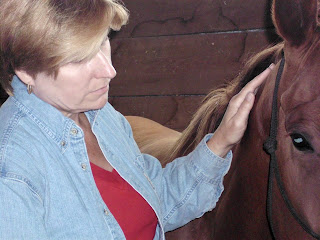 He has adapted very well to his new surroundings, and the pony Shasta, has decided he is her new boyfriend...not sure Kit is aware of the situation, but he is not being left alone and that makes him happy and more relaxed. His initial turn out was individual, with fence access to the herd, however, when they got out of sight he became more anxious, trotting and even cantering around his enclosure. While I was thrilled to see him move this much, I was also concerned it might be too soon, so we opted to let Shasta join him in the turn out.  She basically said "It's about time....come here sweetheart!" 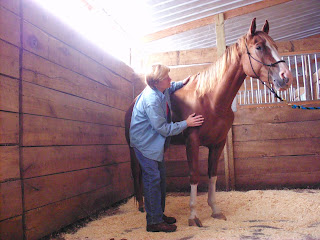 Kit did well on bodywork #5, with great progress in lifting and allowing 3 feet to be picked and cleaned.  Still can't lift and hold the left front, as the right front will still not support the weight.  He also allowed the release of the shoulder/withers juncture on the left, which was big, since this is the working/non-injured side.  We had to go slow and attempt it numberous times, but eventually it opened and released, with lots of nice big yawns for release. 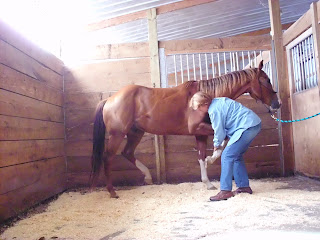 How do you like this 2 footed move...pretty neat!
Posted by Tami Parr at 4:20 PM No comments: 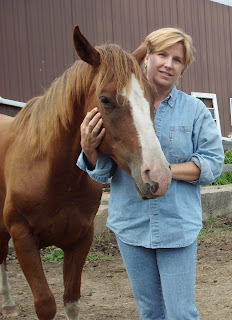 The history on Kit is as follows, he was given to me just over a month ago, when a client called to ask me to find him a home. He is a registered quarter horse and the grandson of sire High Brow Cat.

He was found down in his turn out at the end of April,  his right front leg appeared to be injured, and suspected to be an abscess.  There had been a lot of rain and the turn out was muddy and slick. No abscess was found and still he did not get up.  10 days later he finally was up, but only using 3 legs, his right front hung limp and inactive from his side, as he moved in tripod fashion.  His back bowed and rear legs tucked unnaturally under his body.

For 2 months he used this method to move around, and miraculously the left leg has supported him through it all.  As this time progressed, the muscles of the shoulder atrophied, and it was felt he was of no use.  He was to be put down, but the owner's wife wanted to give him time, I'm glad she did!

Kit as of 1 month ago, began using the right front, not with full weight, but he is walking and moving more normally now on all 4 legs.  Healing is occuring, ever so slowly, but healing none the less.

I agreed to take Kit, to use what I know, and what I'm learning each day to work with him toward healing.  I will continue to document in this blog the progress, victory and failures as we progress, in the hopes that it will help other horses and owners to work through such a serious injury. 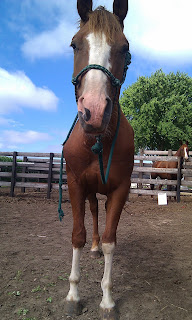 I was happy to present at the Horse Days 2011 in Belvidere, IL on Aug. 20-21 of this year. This was a first time event and I must say very well done. The English rider was very present in the showings, with a smaller percentage of Western, but I suspect once the word it out there will be more of both next year.

I presented demonstrations of how Equine Bodywork is used, the techniques, and how it can benefit your horse. I was happy to bring people up to try techinques and see the reaction given by the horses.  With wonderful volunteer demonstration horses and excited participants, it was a really great time of teaching and sharing this work I love. 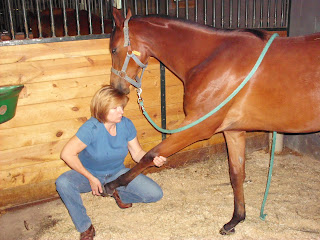